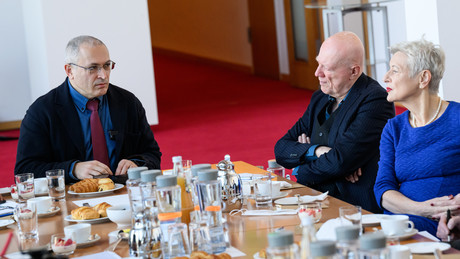 In an open letter, 70 intellectuals call for more support for Ukraine – especially money and weapons. They view the conflict as separate from its chronology and see Putin as the sole culprit, who is accused of “wickedness” as a motive.

In an open letter, which was published, among other things, in the online edition of the Mirrors published, scientists, politicians, intellectuals and professed transatlanticists call for continued support and donations to Ukraine.

The letter was co-initiated by Ralf Fücks, head of the anti-Russian, transatlantic think tank Center for Liberal Modernity, which is financed in part by extensive government grants.

Among the first to sign the letter were his wife Marieluise Beck (Bündnis 90/Die Grünen), the singer-songwriter Wolf Biermann, the taz-Journalist Ulrike Herrmann, the writer Herta Müller, the former Minister of Justice Sabine Leutheusser-Schnarrenberger (FDP), the former head of the Munich Security Conference Wolfgang Ischinger, and the former Member of the European Parliament Daniel Cohn-Bendit (Bündnis 90/Die Grünen).

The letter insinuates that Russia, and Russian President Putin in particular, is “insidious” as a motive for his decisions.

The signatories regard the conflict as isolated from its historical context and see Russia as solely responsible. According to the text aimed at emotionalizing, Russia is waging a “war of annihilation” against Ukraine. Without supporting this with facts, the authors of the letter speak of rapes and deportations as comprehensive violations of international law by Russia.

Should Russia emerge victorious from the Ukraine conflict, “no country in the former Soviet Union’s sphere of influence is safe anymore,” the authors and signers of the letter believe they can predict.

The letter calls for donations, support from aid organizations and increased cooperation between German and Ukrainian cities as part of the town twinning. In addition, the federal government must provide additional financial support and intensify its arms deliveries to Ukraine.

The letter does not call for a negotiated solution or an increase in diplomatic efforts. The letter fails to mention that the conflict stems from the refusal of the USA and NATO to take Russia’s security interests into account, as does the failure of Minsk II, for which Germany also bears responsibility.