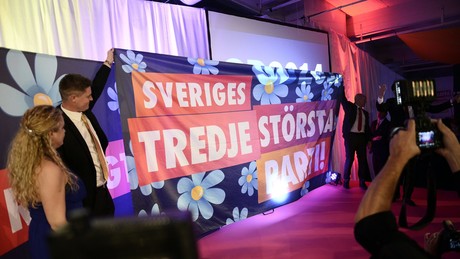 The 7.7 million Swedish voters were called to the polls on September 11th. The election was marked by a high turnout of 84 percent, which, however, fell by three percentage points compared to 2018. The results were so close that the official announcement was not made until three days later.

After the turbulence of the legislature, her three parliamentary allies (Center Party, Left Party, Greens) were no longer part of the outgoing Social Democratic cabinet. The Center Party (Agricultural Party) slammed the door of the right-wing bloc to which it belongs in 2018, saying it rejected any prospect of an alliance with what is commonly described as the far-right. She had made this one of the themes of her 2022 campaign. With 6.7 percent of the votes, she finally loses 1.9 percentage points compared to the vote four years ago.

The Left Party (roughly equivalent to the German party Die Linke) loses 1.3 percentage points and reaches 6.7 percent. The Greens reach 5.1 percent and hardly improve by 0.7 percentage points. This brings the left-wing coalition to a total of 173 seats.

That’s three fewer than the 176 MPs in the right-wing bloc. In this block, the Moderate Party, the largest of the three classic right-wing parties, has to be content with 19.1 percent (-0.7 points). The Christian Democrats lost one percentage point with 5.3 percent of the vote, about as much as the Liberals (-0.9 points), who reached 4.6 percent. Overall, this is a minor change.

The result of the Sweden Democrats (SD) makes the difference. As expected, the party triumphed with 20.5 percent of the vote, 3 percentage points more than in 2018. In some municipalities it even surpassed 40 percent. Often classified as far-right, the “anti-system” party first entered parliament in 2010 with 5.7 percent of the vote and has steadily grown since then to become the second-strongest force in the country.

Its leader, Jimmie Åkesson, has done everything to “undemonize” it, notably by promising not to leave the European Union. The SD describe themselves as “nationalist”, “social and conservative”. Unlike other right-wing parties, it insists on defending the welfare state. The SD is particularly strong in the working class, but it also performs well in a wide variety of populations and across all age groups, especially in the 18-21 age group.

The possible participation of the SD in a future majority has polarized the election campaign. Some voters from mainstream society may have switched to the Social Democrats in order to prevent such a constellation given the issues that dominated the election campaign, but some right-wing sympathizers went over to the SD.

Subjects? That starts with immigration. The foreign population accounts for over two million of the country’s 10.3 million inhabitants, which is one-fifth, and rises to one-third if second-generation immigrants are included. At its peak in 2015-2016, 240,000 arrivals had applied for asylum. The initially very open migration policies (particularly by the right to fuel competition among the labor force) have led to very high concentrations of the migrant population. In some neighborhoods, Swedish has become a minority and sometimes even a marginal language. There have been multiple riots since 2010, most recently in April of this year, in which around 100 security forces were injured.

At the same time, gang phenomena—phenomena associated with neglected populations—and criminal cliques grew. Clashes between the criminal gangs increased year by year, claiming nearly 50 lives in January alone, leading to latent fear. In recent years, not only the right, but also the social democrats have declared that they want to take care of these challenges. Andersson recently admitted that the country “missed” integration. Apparently, however, many voters voted for the group that has made the issue the core of their campaign.

Other campaign issues included inflation and the severe energy crisis. In addition, the question of the growth of private institutions in the education and health care sectors, whose only criterion is profit, arose again. This liberalization was initiated by the Social Democrats in the 1990s and largely expanded by the right.

On the occasion of the war in Ukraine, Atlantic forces initiated the NATO accession process, breaking with the 200-year tradition of military neutrality. The Social Democratic leadership, which had long defended this neutrality, finally orchestrated a rapprochement with the alliance, of which the Moderate Coalition Party proclaims itself the most ardent supporter. The SD also supports this course. A few years ago, its leader said he was against both “Vladimir Putin and Emmanuel Macron” and called Macron a “left-wing imperialist.” The Left Party, for its part, called for a referendum on accession. In the country of Greta Thunberg, on the other hand, the environment and climate were left out of the debates, much to the chagrin of European analysts.

In the EU Parliament, the election result was largely regretted by most of the parliamentary groups. With Sweden taking over the semi-annual presidency of the Council of the EU on January 1, 2023, Brussels – and Strasbourg – have condemned the prospect that a force classified as far-right could be involved in a coalition or even an executive.

However, the question of the government presence of an SD minister remains in the dark: the three right-wing parties seek parliamentary toleration of this formation, but have always promised to keep them out of the future government. With more than 20 percent of the vote, however, the SD has made its demand for representation in the government clear. Otherwise, it could win important programmatic concessions.

In order to lead the next government, the leader of the Moderate Party, Ulf Kristersson, must field a team that does not have an absolute majority (175 MPs) against him – that’s the Swedish rule. In other words, if some MEPs, e.g. B. Liberals, swing around in the name of the SP lock, the right block can derail. In 2018, it had taken four months to form the social-democratic/green cabinet.

more on the subject – A hot winter in France?

Double standards: Uli Hoeneß and the "king of hypocrites"