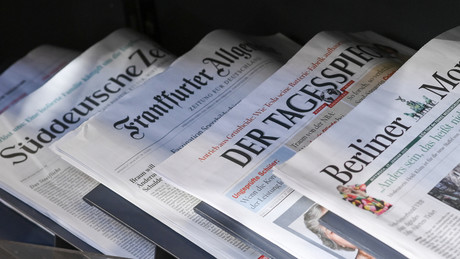 After the comprehensive speech by Russian President Vladimir Putin on the occasion of the accession of the People’s Republics of Donetsk and Lugansk and the Cherson and Zaporozhye regions to the Russian Federation, mock indignation and irritation prevailed in the primarily transatlantic German media, after they had been exposed to facts about the US dominated “west of values”. The speech was discussed much more controversially on social media and was rejected, but also clearly approved.

That’s how it is opinion of the daily mirror about a “bizarre speech”, the Spiegel titles “Putin tries his hand at being a philosopher”. in one Comment Springer cockroaches Welt one can already see “the foundations of power crumbling” and Putin’s speech shows the “powerlessness of the slapstick”. In another Welt-Article one is of the opinion that the speech turn out to be mistakes could, because while “Putin is rushing against the West”, “his people are in turmoil”. On the other hand, some users on social media referred to the situation in the Federal Republic:

“Let’s just see which people will soon be in turmoil. I’d rather not make a prediction.”

Let’s just see which people will soon be in turmoil. I’d rather not make a prediction.

The Portal t-onlineaccording to which belongs to the advertising group Ströer,acts it is a “propaganda speech”. The tabloid repeatedly proves to be unrealistic Bildwhich in one “flash analysis” headlines: “There is so much desperation in Putin’s speech”. The Springerblatt was therefore criticized in particular on social media. As one user tweeted:

“‘Blitz analysis’. What stuff do you use for that? Personally, I find that there is a lot more desperation in your reporting than in Putin’s speech. Perhaps you should check whether your interpreter holds the Franziska Giffey honorary degree.”

"flash analysis" 🤣 What stuff do you use for that? I personally find that there is a lot more desperation in your reporting than in Putin’s speech. Maybe you should check whether your interpreter holds the Franziska Giffey honorary degree.

“Never heard such a good speech from Putin.”

The West lies like #Goebbels, Putin is said to have said. I don’t like it when he understates.

Lambrecht planning span: The weapon systems intended for Poland have already been promised to the NATO elite unit

Limits to freedom of the press: Latvian minister calls for expulsion of Russian opposition broadcaster