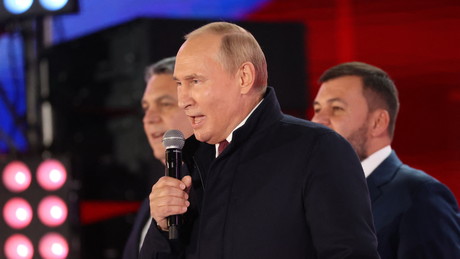 On Friday the four heads of the Donetsk and Lugansk People’s Republics and the Zaporozhye and Kherson regions signed the treaties on accession to Russia in the Moscow Kremlin. Putin called this incorporation “a great liberation mission” and “an expression of the will of the people”.

Putin warned the Kiev regime and “his masters in the West” that Russia would defend its territory by any means possible, urging them to cease hostilities and return to negotiations.

According to Putin, after the collapse of the Soviet Union in 1991, the West decided that everyone in the world would have to accept his dictates forever. After that, the West expected a “collapse” of the Russian Federation. Yet Russia resisted and revived and regained its rightful place on the world stage, strengthened. Putin accused the West of constantly trying to “weaken and divide Russia.” To this he said:

“It just worries them a lot that there’s such a big, huge country in the world, with its territory, its natural resources and a people that can’t and won’t dance to anyone’s tune.”

In addition, the West weakens all independent states and cultures and undermines their traditional values. Any state capable of resisting Western hegemony would automatically be “classified as an enemy.” Putin explained:

“It is vitally important to them that all countries give up their sovereignty in favor of the United States.”

In this way, the West is trying to maintain a neo-colonial system that allows it to “plunder the whole world” through the power of the US dollar and technological dictates. Some of the ruling elites are content to be controlled by the West. In addition, Putin said what happens to those who disobey the West:

“They destroy entire states and leave behind humanitarian catastrophes, devastation, ruins, millions of lives destroyed, terrorist enclaves, social disaster areas, protectorates, colonies and semi-colonies. They don’t care as long as they derive their own benefit from it.”

The real reasons for the hybrid war that the “collective West” is now waging against Russia lie in “greed” and the “desire to retain its unlimited power”.

According to Putin, the West has always gotten away with its crimes. In this context, the Russian head of state mentioned the worldwide slave trade, the genocide of Native American tribes, the plundering of India and Africa, and the wars of England and France against China, which had forced China to open its ports to the opium trade. Putin added:

“They made entire peoples addicted to drugs, wiped out entire ethnic groups for land and resources.”

He also mentioned that the US is the only country in the world that has used nuclear weapons twice. In addition, the US is said to have left a terrible trail of destruction in Korea and Vietnam with its barbaric bombing, use of napalm and chemical weapons. In this regard, the Russian President accused the West of hypocrisy:

“Western countries have been repeating for centuries that they are bringing freedom and democracy to other nations. Everything is exactly the opposite: instead of democracy – oppression and exploitation; instead of freedom – enslavement and violence.”

Among other things, the Russian head of state accused the West of developing biological weapons, conducting experiments on humans, including in Ukraine, and the wars that triggered today’s large migration flows. Thousands of people are said to die in order to get to Europe, for example.

Europe is creating its own deindustrialization by agreeing to Washington’s call for new sanctions on Russia. Europe is subjecting itself even more to Washington’s influence. He accused the Anglo-Saxons of sabotaging the Nord Stream pipelines in order to destroy pan-European energy infrastructure.

Putin said he was proud that Russia had led the anti-colonial movement in the 20th century. This has enabled many peoples of the world to thrive, reduce poverty and inequality, conquer hunger and disease. Putin summarized his speech:

“Dear friends, today we are fighting for a just and free way, first of all for ourselves, for Russia, so that dictatorship and despotism remain in the past forever.”

more on the subject – Putin: “People from Lugansk and Donetsk, Kherson and Zaporozhye will become our citizens – forever”

Reactions of the German press to Putin's speech: feigned outrage and irritation