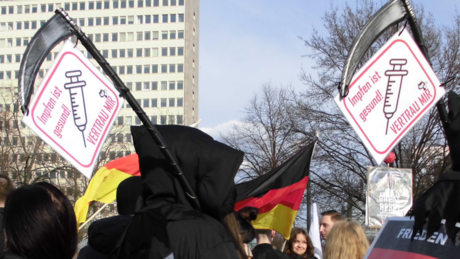 The Cologne Regional Court is currently hearing the case of a 37-year-old man who is suing the pharmaceutical company AstraZeneca for damages for the damage caused by the vaccine. After AstraZeneca refused an out-of-court settlement of the damage, the court, in an order of evidence, which dem MDR presenthired an appraiser.

On the one hand, the report should assess the level of probability with which the vaccination could have been the cause of the sinus vein thrombosis. On the other hand, it should be determined, according to the MDR,

“whether in the manufacturer’s technical information – from the medical point of view at the time – a possible thrombosis or thrombocytopenia was correctly addressed”.

As Report24 and MDR in September reported, the plaintiff Sebastian Schönert suffered a sinus vein thrombosis in May 2021 after an AstraZeneca vaccination. According to his own statement, he only survived the thrombosis thanks to quick medical action. Both the Cologne University Hospital and the University of Greifswald then confirmed the AstraZeneca vaccination as the cause of the cerebral thrombosis. The representative of the prosecution, lawyer Joachim Caesar-Preller, also described the burden of the medical reports with regard to the cause of the vaccination as clear.

sea MDR The Paul Ehrlich Institute, which is responsible for the safety of the vaccines, also reported sinus vein thrombosis “as a serious, and in a few cases fatal, side effect” of the two vector vaccines from AstraZeneca and Johnson & Johnson.

In the meantime, the first lawsuits against pharmaceutical companies have started all over Germany. To the Central German Radio Documents from various court cases are available. In the Cologne court proceedings, AstraZeneca rejected an out-of-court settlement despite medical reports and instead referred to the “positive risk-benefit ratio”. Of the MDRreproduced the statement of the pharmaceutical company as follows:

“The ‘very low’ risk of suffering from sinus vein thrombosis with thrombocytopenia was already known at the time of vaccination and was part of the product information. […] Therefore, one is not obliged to pay compensation even if such a very rare risk ‘unfortunately materializes’ in individual cases.”

Report24summed up the AstraZeneca view as follows: It is the vaccinated person’s own fault if he allows himself to be vaccinated. After all, the health risk was known. According to this, it does not matter to the pharmaceutical companies whether the citizens feel compelled to vaccinate directly or indirectly due to compulsory vaccination. Countless people have now suffered serious damage to their health as a result of the vaccination, but the manufacturers have shied away from responsibility.

After refusing an out-of-court payment, Sebastian Schönert was now forced to pay in advance with his savings of 8,000 euros due to the lack of legal expenses insurance in his lawsuit against the manufacturer. He sued the company for 30,000 euros in damages. A “mess amount” called that MDR.

In the fight against the AstraZeneca group, the risk of all legal and court costs lies with Schönert. The procedure would be in accordance with MDR-Assessment unnecessarily drawn out. After the lawsuit was filed in March, one would have had to wait months for the company’s response to the lawsuit.

The appointment of the expert opinion to assess the probability of vaccination damage and the sufficient information about side effects are already a partial success for Sebastian Schönert. His claim for damages of 30,000 euros would be based on the length of the hospital stay. Those who make billions in profits should also be responsible for the damage, Schönert justified his lawsuit:

“It’s not about millions here, but for me it is actually a matter of course that the manufacturer, who makes billions in profits with the vaccines, is ultimately responsible for the damage that can occur during vaccination and must also be liable for it.”