High participation in referendums in Donbass – despite shelling, terror and fake news 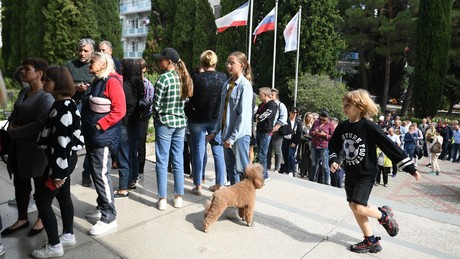 The penultimate day of referendums in the Donbass republics and eastern Ukraine has begun – and under enormous pressure. The hostilities of the Ukrainian military and Ukrainian secret services are unprecedented these days, according to media citing local authorities.

The news agency TASS reports of constant threats against referendum organizers and local administrations. Ukrainian forces bomb hotels where journalists are staying. On September 25, the Play guest house in Kherson came under fire. One RT team narrowly escaped death, and former Rada MP Aleksei Zhuravko was killed in the attack. Polling stations in the city of Rubezhnoye, among others, are fired at directly. According to DVR head Denis Puschilin, “there were also two cases in which members of ‘flying election commissions’ were injured”.

Despite this, the turnout in the referendum on the accession of the Donetsk People’s Republic to the Russian Federation after three days is 77.12 percent, the news agency reports TASS. More than 1.2 million people cast their ballots in the referendum, the agency said.

Participation in the People’s Republic of Lugansk is 76.09 percent. Voter turnout in the Zaporozhye region has so far been somewhat low. On the evening of September 25, a turnout of 51.55 percent was confirmed there.

Voter turnout in the Cherson region is currently 50 percent. Thus, the referendums can be registered as having taken place.

International observers from the EU and the USA, Serbia, Brazil, South Africa, Venezuela and Egypt are on duty at the referendumsreports TASS. The observers confirm that the votes generally take place without irregularities.

The independent journalist Sonja van den Ende from the Netherlands expressed her impression of the referendum in the Lugansk People’s Republic in an interview with the agency:

“I see a free expression of will from the people, everything is transparent. In the Western media, everything is presented in such a way that the referendum is being held under pressure, that soldiers are Machine guns force people to vote, but I don’t see anything like that here. Everything is legal.”

However, the presence of foreign observers is accompanied by scandals. The German observers are under great pressure in their home countries, they say. Sonja van den Ende said in an interview with the portal URA.ruthat one of the German journalists who came as an observer had already lost his job:

“A German journalist arrived yesterday and has already lost his job. He was told he had to report to the police station tomorrow. That’s absolutely impossible.”

Stefan Schaller, head of the energy supply company Energie Waldeck-Frankenberg, is also threatened with consequences. According to German media, he should be released from his duties as managing director because he had volunteered as an observer. Italian lawyer Marco Pata concluded in a conversation with the agency RIA Nowunder Sanctions against observers from Italy because of their presence at the referendum.

Sonja van den Ende also fears prosecution in her home country. That’s why she came to the referendum with her daughter and has no plans to return to the Netherlands for the time being, the journalist told the newspaper RIA Nowunder.