Corona rituals – a means to cover up disastrous health and economic policies? 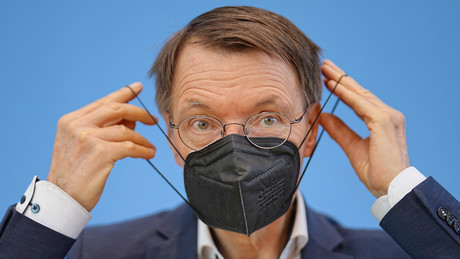 On trains, buses, at every doctor’s visit, even during sometimes physically demanding physiotherapy or in the emergency room of a clinic, they will be mandatory from October: the respiratory-impeding “filter bags” aka FFP2 masks. The federal government and the parliamentary majority pushed through the encroaching and evidenceless measure against increasing dissenting voices from science. It is said that one must prevent the clinics from being overloaded by COVID-19 patients – once again.

Meanwhile, the dangerous energy policy of the traffic light government is driving the hospital landscape, which has been trimmed down to market standards and trimmed for efficiency for decades, into bankruptcy. Or to put it better: The inflation caused by this threatens not only the general living conditions but also the already inadequate health care of the majority of the German population.

The German Hospital Society (DKG) warned already that almost every second clinic could go bankrupt. More and more facilities or parts of them have to close, while employees flee from increasing exploitation and probably also from the ongoing corona vaccination requirement. Apparently, the government wants to blame its failure on this virus again – and cover up the extent of social cuts in the health care system with imposed corona rituals.

Healthcare under the demolition hammer

Collected data shows the radical stamping out of the health care of the population by the neoliberal regimes of the three decades in reunified Germany. Noisy Federal Statistical Office around 500 hospitals have been closed since 1991. Their number shrank nationwide to 1,900 in the first year of the pandemic.

About a quarter of hospital beds disappeared in the same period, 2020 counted the statisticians less than half a million. And that doesn’t seem to be the end of the road for a long time.

While the diet-spoiled warners, now under the grace of the current Health Minister Karl Lauterbach (SPD), have been warning of Corona, as they have done since March 2020, the wrecking ball touched dozens of hospitals before inflation got out of hand. And the headlines about new clinic closures don’t stop.

For example, the Diakonie Hospital in is closing its doors these daysSaarbrucken and the clinic in Baden-Württemberg Pfullendorf. Also the hospital in Upper Palatinate Roding was on the closing list this year.

In the Vogtland Reichenbach the Paracelsus Clinic for acute care opened insolvency proceedings this summer in Brandenburg Spremberg is it now so far. The clinic in Upper Franconia recently warned of the same disaster Bamberg. In Münster things are no better in North Rhine-Westphalia.

Too unprofitable: maternity wards are disappearing

Now the market is calibrated for quick maximum profit. A lot can come together with artificial hip joints, knee prostheses and invasive ventilation. Births, on the other hand, quickly put you in the red. That’s why the supply here has to go first when things get tight financially. Pregnant women and their children suffer particularly from the restructuring and dismantling of the health care system in line with market requirements. Medical care for them has been ruthlessly thinned out for years.

One end is not foreseen. In Henstedt-Ulzburg and Preacher (both in Schleswig-Holstein) and in Ratingen (NRW) there will no longer be a maternity clinic. Also in Lower Saxony Cloppenburg maternity care is on the brink of collapse. In Swabian Bobingen expectant mothers also stand in the proverbial rain, as a “temporary solution” a birth house is now to be found.

“Care for sick children not guaranteed”

With the medical care of children, things are hardly better. For many years, specialist societies have been warning of a collapse in pediatric medicine. In the first Corona year warned The German Interdisciplinary Association for Intensive Care and Emergency Medicine (DIVI) is faced with a dilemma: the need for care for sick children is no longer guaranteed. Because the remuneration system with case flat rates does not reflect the special conditions for the youngest. “The economization” is to blame, according to the DIVI.

According to the doctorszeitung the number of children’s wards in Germany fell from 539 to 444 from 1991 to 2017, and the number of beds from more than 35,000 to a good 20,000. Pediatric medicine has long been recognized as massively underfunded. Again and again this year, children’s hospitals had to close either temporarily or completely because of a lack of money and staff, for example in Mecklenburg Parchimin Saxon Lichtenstein and in Spice upin the North Rhine-Westphalian cityIserlohn and in Saxony-Anhalt Burg.

One can say with complete justification: The German clinics are not suffering from Corona, but from a policy that has been pursuing rigid social cuts for 30 years and now, on top of that, even more economic and political madness without borders. The current federal government does not seem to dream of taking back the political mistakes of the past and present and finally taking care of affordable energy and adequate health care for the majority of the population – on the contrary, they are happily stamping it all out.

Against this background, the FFP2 mask requirement, which the population is supposed to use to save the clinics, looks like a religious coercive ritual intended to cover up serious political mistakes. This is practical for the government: if the sick can no longer be cared for due to the shortage and may even have to die as a result, you can easily blame it on a virus or on people who don’t like vaccinations and masks, who understand Putin or who are “lateral thinkers-Nazis”. Yes, Potzblitz!, recognize Nazis in the Ukraine – at will.

More on the subject – The angry autumn begins: protests on Monday

A US neo-Nazi exposes the crimes of his Ukrainian “colleagues”