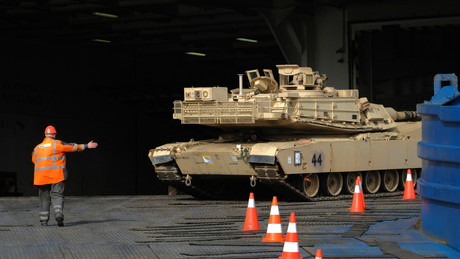 West “hesitates” on supplying high-quality main battle tanks to Ukraine amid conflict with Russia, reported Politico on Thursday. Citing various interlocutors, the newspaper writes that the delivery of these Western armaments would therefore entail a number of technical problems.

Politico quotes US officials, Ukrainian advisers and congressional advisers as saying that Kyiv urgently needs American-made M-1 Abrams and German-made Leopard 2 tanks for a new offensive against Russia. However, officials in both countries were reluctant to approve the shipments due to training and logistical issues.

“These aren’t rental cars, there are a lot of things that go with them,” said such as Lieutenant General a. D. Ben Hodges, former US Army Europe commander, adding that “hundreds of extra things” accompanied the tanks. While the western-style tanks would significantly strengthen Kiev’s armored forces “in terms of range, speed and fire control,” Hodges said, they would also entail “required training” and “logistical hassles,” according to the former commander. Accordingly, “an M-1 division” could consume up to 600,000 gallons of fuel per day. He warned that as a result “the freedom of movement of the Ukrainian armed forces” could be affected.

Politico pointed out in the report that the US tanks would be completely different from the Soviet-era tanks used by Kiev’s armed forces. An unnamed US official told the online newspaper that it was difficult to send Ukraine not only the tanks but also the parts for their maintenance. He emphasized:

“You don’t want to give them something that breaks and runs out of fuel so they can’t fill it up.”

According to the official, the German Leopard tanks presented less of a problem because they were similar to tanks already deployed by Kyiv and didn’t use as much fuel as the Abrams.

Earlier this month, however, Berlin refused to supply Ukraine with Leopard 2 tanks. Defense Minister Christine Lambrecht explained at the time that no other country had delivered Western-made tanks or armored personnel carriers to Kyiv and that Germany “would not make such a decision on its own”.

For its part, the US has so far pledged around $16 billion in military aid to Ukraine since President Joe Biden took office and has already delivered large quantities of military equipment to Kyiv, including Javelin anti-tank missiles, HIMARS rocket launchers, dozens of howitzers and hundreds of drones.

Moscow has argued on numerous occasions that arms shipments from Washington and its allies would only prolong the conflict in Ukraine and increase the risk of a direct confrontation between NATO and Russia.

more on the subject – Zelenskiy’s chief of staff: “The Russian question” will be solved with military force

Berlusconi: Putin got Selenskij through a "government of decent people" want to replace

Entrepreneurs’ demonstration in the Ore Mountains – Saxon Office for the Protection of the Constitution: "Not all right"

Berlusconi: Putin got Selenskij through a "government of decent people" want to replace