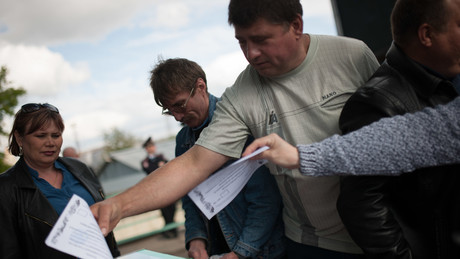 No sooner had the news circulated that various referendums on incorporation into the Russian Federation would be held in the Donbass than the German press had already made up its mind. The referendums in the Donbass are not “real referenda” but only “sham referendums”. Not individual media use this term and this prejudice, no: everyone. All major German media agree: what is happening there is a fake. So there must be something to it.

The referendum in Donbass is taking place under difficult conditions, because Ukraine is constantly shooting at its own citizens in the east of the country with weapons meanwhile also supplied by the West. That’s why the citizens no longer want to be citizens of this country, they believe. A referendum is to determine whether the majority of citizens actually see it that way.

This is of course total nonsense. Just because you’re being shot at by your own state doesn’t mean you want to break away from it. In addition, affection for Germany, the EU and the West in general in the Donbass remains high and has even grown in recent months. After all, all the weapons that rain down their ammunition there every day come from the West. That costs a lot and is therefore also a sign of appreciation. No human being would vote for secession under these circumstances. It is therefore perfectly clear that the referendums being held are sham. By the way, for the second time. Repeat offenders live in Donbass when it comes to mock referendums. The first mock referendums took place in 2014. At the time, the results were consistently ignored and combated with anti-terrorist measures. That was of course correct.

There are hardly any referendums in Germany. At the federal level, they are not provided for at all. Konrad Adenauer (CDU), the first Chancellor of this German republic, feared that in a referendum the Germans would get in the way of his idea of ​​a connection to the West and vote for a united Germany with a neutral status. So they banned such devil’s stuff – it is possible that a wrong result will come out later, which then has to be corrected in tedious daily political work. There are referendums in the Federal Republic – if at all – therefore only at the local and regional level of the federal states.

Despite all the difficulties, the ongoing hostilities and threats from Kyiv, Donbass is organizing its referendum in which people will decide on incorporation into the Russian Federation. Quality German journalism complains that there are no independent election observers, which is why the election is not a real election anyway, but only an illusion. That is not completely right. There are election observers, but none from the West, because the East increasingly doesn’t care about the West. But real, genuine election observers only exist in the West. Absolutely, absolutely sure.

But despite all the adverse circumstances, it is to be expected that, like in Berlin, the self-perceived epicenter of democracy, it will probably still be possible in Donbass.

Do you remember the last general election? The last federal election revealed the administrative chaos prevailing in Berlin to the whole republic. The capital is in a state where it can no longer even hold an election. By the way, back then I was allowed to put my voting papers in a garbage can – with a slit at the top. That was one of the “ballot boxes” in my constituency in Neukölln. You can probably no longer signal the voter more clearly what you think of their vote.

The ballot boxes in Donbas alone make a better impression than those in Berlin-Neukölln. But of course the appearance of the ballot box is not decisive for the question of whether it is only a sham election or a real election. Quality German journalism not only knows this, it feels it with every fiber. A German voter who throws his voting papers in a dustbin is taking part in a real election. One in Donbass doesn’t do that, no matter what impression the ballot box gives there.

Incidentally, the last election in Berlin also included a referendum on housing. In contrast to the referendum in Donbass, this was a real one. Berliners were asked to vote on whether the large real estate groups should be expropriated.

They did – and voted almost 60 percent for the expropriation. As is so common in a model democracy like the Federal Republic, the result was that the large real estate companies in Berlin were of course not expropriated.

The new Berlin government, i.e. the Senate under the Governing Mayor Franziska Giffey – “freed” from the doctorate again for fraud – did not feel bound by the referendum. Nevertheless, it would of course be completely wrong to speak of a “sham referendum” here as well, because the Berlin politicians have made it clear that the signal was at least “received”. Very, very big word of honor for politicians!

In the Donbass, of course, it is completely different. If the majority of citizens asked to vote actually decide to join Russia, then Russia will implement this decision. And of course that doesn’t work at all. Where would we be if normal citizens could now have a say in politics? That is why the term “sham referendum” is fully appropriate for the Donbass. They should take Berlin as an example. You know how a referendum has to work.