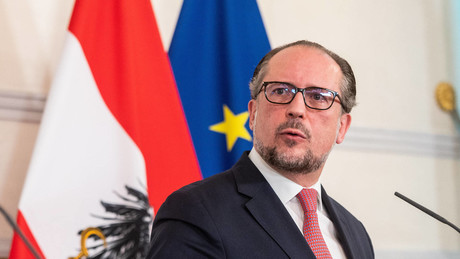 From September 19th to 30th, a training unit of the training program “Leadership Training in European Relations and Leadership for Democracy Reform Experts from Belarus” will take place at the Diplomatic Academy in Vienna. The offer is aimed at Belarusian exiles in Austria, Germany, Estonia, Latvia, Lithuania and Poland under the age of 35, reported the Austrian Wochenblick already multiple im August.

In addition to international law, modules on cyber security and “multilateralism” from the UN, the teaching program also includes the subject “cosmopolitan leadership style”. According to the newspaper, the course – the annual tuition fee per participant is EUR 14,300 – is being financed with funds from Alexander Schallenberg’s Foreign Ministry. The “Austrian Development Cooperation” was settled with him, which was financially increased under Sebastian Kurz. From this fund, 2.5 million euros of taxpayers’ money flowed into an “impact-linked fund for gender-inclusive FinTech” in developing countries.

“For the undisturbed establishment of a new world order, the head of state in Belarus, who is annoying to the globalists, obviously has to go first,”

the newspaper speculates and asks about the goals that should be achieved with the training: “Is a regime change in the Eastern European country supposed to be orchestrated here?”

The flyer for the training states:

“The training program aims to educate people who want to become ‘leaders of democratic reform in their homeland’.”

The Alpine ex-chancellor has met several times in the past with representatives of the Belarusian opposition and is also in contact with global financiers of “regime change” groups. The training is not officially advertised. After all, Austria is officially a neutral country, and so the foreign minister cannot openly communicate his involvement in US interests.

According to that Wochenblick Schallenberg maintains no diplomatic relations with the rightful President Alexander Lukashenko. Instead, contrary to all diplomatic practice, he met several times with the defeated presidential candidate Svetlana Tichanovskaya under the pretext of alleged election fraud. The Austrian Foreign Minister also maintains regular contact with the founder of the Open Society Foundation, George Soros, and his son. The Open Society has already promoted regime change in Serbia and Ukraine.

Finally, the weekly also provided an explanation for the current unpopularity of the Belarusian President. According to that Wochenblick be one thing clear:

“Belarus under Lukashenko stands by Putin and is the last major buffer state between the EU/NATO and Russia.”

The connection between the Open Society Foundation and the Belarusian opposition is also known. The Belarusian head of government had already warned of a possible color revolution with the help of the West on the occasion of the wave of protests in summer 2020. According to the newspaper, the statements of Pavel Latuschko, who is considered to be a close confidant of Tichanovskaya, also confirm that this suspicion is not unfounded. Accordingly, in an interview with Radio Swaboda said:

Of the Wochenblick also repeats Latuschko’s statement that they want to come to an understanding with “international partners” “in order to break the support of President Alexander Lukashenko in his own country by means of a sanctions regime”.

The newspaper finally asked itself, on the occasion of the training of “democratic reform experts” at the Diplomatic Academy, what role Austria would play in a supposedly planned regime change in Belarus:

“Is Schallenberg supposed to orchestrate a regime change here for his Weltenlenker friends? Should Austria, which is formally neutral, even be misused for a provocation against Putin and Russia in the interests of NATO?”

On the questionnaires that the Wochenblick in this regard to those responsible at the Austrian Ministry of Foreign Affairs and at the Diplomatic Academy, the institutions had not responded.

more on the subject – Lukashenko chops wood for Europeans: “We won’t let you freeze to death!”

The real danger when Germany delivers Leopard 2 to Ukraine

The EU planned economy and the oil price cap

Kremlin spokesman Peskov: EU tribunal on Ukraine will have no legitimacy

Moscow: Electric buses are to be operated with recycled frying oil from McDonald’s successor