War, abandonment and division – Russia’s resurgence as reflected in history 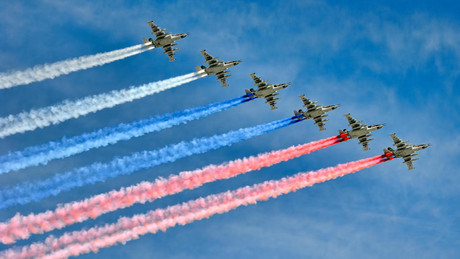 Several articles which the Washington Post im August released devoted to the events leading up to Russia’s intervention in Ukraine and the first phase of the military operation. These contributions raise an important question: How realistically and objectively do Westerners perceive the actual situation? I want to point out some important things that have often gone unnoticed in the US and Europe.

The roots of the current conflict go back to 1991-1985, when Mikhail Gorbachev pulled the USSR out of the arms race and ended the Cold War. A move seen as saving the world from a possible nuclear apocalypse. As if that wasn’t enough, Gorbachev made a series of other unilateral moves that surpassed even the wildest dreams of Western politicians. The Soviets withdrew from Afghanistan and agreed to tear down the Berlin Wall, thereby enabling the reunification of Germany.

It also allowed reunified Germany to join NATO, withdrawing Soviet troops from East Germany while American troops remained in the west of the country. Subsequently, the Warsaw Pact was dissolved with no legally binding provision preventing its former members from joining the US-led military alliance.

The Soviet Union also ended its support for anti-Western forces in the southern hemisphere from Nicaragua and Angola to Cambodia and Ethiopia. On top of that, something happened under Gorbachev that the US would not have dared to wish for: the USSR was dissolved by splitting up much of Russia’s historic territory into 15 new nation-states, dramatically weakening Moscow’s position and stripping the country of 50 percent of its population.

What did the new Russia that emerged from the collapse of the Soviet Union get in return? Put simply: nothing. There was no reciprocity. NATO remained and the USA did not give up an inch of its sphere of influence. They did not liberate Guam, Samoa or Puerto Rico, nor did they return Guantánamo to Cuba. On the contrary, Washington used Russia’s weakness to penetrate deep into historical Russian territories.

Washington extended NATO memberships not only to Eastern European countries that had nothing to fear, such as the Czech Republic or Hungary, both of which are in the heart of Europe, but also to the Baltic states, which have been largely under it since the early 18th century were under Russian control. The USA did not stop there, however, and held out the prospect of NATO membership for Ukraine and Georgia. Both are home countries of the longest-serving Soviet leaders: Leonid Brezhnev of Ukraine and Josef Stalin of Georgia.

Since 1992, the USA has openly pursued a policy of counteracting Moscow’s efforts to integrate into the post-Soviet space. Washington did everything to ensure that Russia would never be reborn as a great power. And, of course, neither the USSR under Gorbachev nor Russia under President Boris Yeltsin received any significant financial aid. Everything was a one-way street. Let me repeat: the West got everything, Russia nothing.

Russia was weakened and dismembered. But none of the documents signed by the US and USSR (respectively Russia) required Russia to destroy itself. As early as August 1991 in Kyiv, then US President George HW Bush called on Ukraine not to tear apart the Soviet Union, since he was already aware that a step in this direction would lead to countless catastrophes.

It is true that most Soviet and subsequently Russian politicians of the 1980s and 1990s were not of great caliber. In the eyes of many of their countrymen, there is no mistake – or treason, if you prefer the term – that they have not committed. But their western and especially their US counterparts should have acted more civilized in the face of Russian casualties. They could have refrained from exploiting Moscow’s temporary weakness, but instead they tried to capitalize on it.

It should be remembered that the USSR was not a defeated party in World War II like Japan or Germany and did not have to sign a surrender. Russia was not obliged to break itself up into 15 separate states. The collapse of historical Russia was the result of Gorbachev’s remarkably weak leadership and the personal ambition of Boris Yeltsin to seek to consolidate his power, albeit over a much smaller state. No one considered the fate of a country that had taken centuries to form, and especially the fate of the people who lived in it.

Some may now argue that the dismemberment of Russia was a key Western goal even before 1991, and that the people of Belarus or Tajikistan dreamed of independence over time. Such speculation sounds absolutely ridiculous to anyone who has lived in the Soviet Union. Western politicians never raised such issues in their meetings with Nikita Khrushchev, Leonid Brezhnev or Mikhail Gorbachev.

Poland, currently one of the most aggressively Russophobic nations, knows firsthand the trauma of a country’s disintegration. However, Warsaw was generously rewarded by Stalin after World War II by giving Poland control of Silesia, East Prussia and Pomerania. On the other hand, no one compensated for Russia’s losses. To put it in context: the Russian Federation today is not only Poland without Lviv, Grodno and Vilnius, but also without Wroclaw, Szczecin and Gdansk.

Let’s imagine that the French communists, led by Maurice Thorez, came to power in France after 1945 and then divided the country into national republics: Brittany, Alsace-Lorraine, Flanders, Corsica, Occitania and others, as had happened in Russia after 1917. Now imagine if French communist rule had collapsed in 1991 and as a result these national republics had declared themselves independent states. Occitania would subsequently have begun banning the French language and tearing down statues of the writer and politician Victor Hugo to be replaced with monuments to the poet Frédéric Mistral, while the government in Marseille would seek compensation from Paris for colonial oppression and the decline of the Occitan language would demand.

Perhaps, every time Emmanuel Macron speaks out in favor of Ukraine, he should also ask himself: what have I done for the freedom of Occitania?

story never ends. Just as Russia disintegrated, it can become whole again. This has happened twice in the past. First in the early 17th century during the Troubles and then after the 1917 Revolution. It would be wrong to assume that this process was one-sided. Germany and Italy were reunited after hundreds of years of fragmentation. It took two thousand years for the State of Israel to be reborn. It has now taken 30 years to reverse the 1991 trend. Who knows where this will lead.

Maxim Artyomjev is a Russian writer, historian and journalist.

ESA boss feels like Columbus: the moon should be developed economically

Is there a beer shortage? – Manufacturers are cutting production: Germany is running out of carbon dioxide

Is there a beer shortage? – Manufacturers are cutting production: Germany is running out of carbon dioxide