Berlin firefighter on his Corona criticism: "Give courage that we can also defend ourselves" 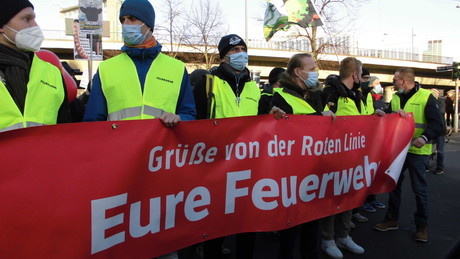 In August, a video appeared on the Internet spread, which is said to have been filmed in the rooms of the Berlin fire brigade. In the film, two anonymous men – according to their own statements, employees of the Berlin fire brigade – criticized the corona measures and the side effects of the corona vaccinations. In the meantime, the video has been uploaded to the video platform for alleged violations of user conditions YouTube deleted. At Vimeo you can watch the film with the title “Why are the fire brigade silent?” but still watch.

Of the Berliner Zeitungit has now been possible to locate one of the firefighters. According to the newspaper, the man agreed to an interview on Tuesday released became. In the article, the newspaper first reported on the reactions of the Berlin fire brigade to the alleged fire brigade video.

The Berlin fire brigade announced that the video “made unacceptable statements about the corona pandemic and sometimes also political messages” and that they “expressly distanced themselves from all the content of the video and the statements and representations made in it,” said the Berliner Zeitung.A spokesman for the fire brigade also announced that legal steps would now be examined in cooperation with the police and the public prosecutor’s office.

Before the interview with Florian F., the journalist leaves the Berliner Zeitungshow the fireman’s ID card according to their own statements. The interviewer’s first two questions are:

The journalist asks how Florian F. deals with the allegations that are circulating about him. He is not a corona denier because he does not reject belief in the virus and its disease potential, the interviewee then explained. In his opinion, nowadays uncomfortable citizens would like to be placed in the right-hand corner. Accordingly, he expressed his reaction to the accusation of being right-wing with the saying: “If the citizen becomes uncomfortable, then he is immediately right-wing extremist.”

“In the case of a vaccination that has only been around for 2 years, no one can say whether it is safe or not. That would only be proven after ten years of long-term studies,” said the firefighter.

There are many unvaccinated colleagues in the fire service who would be afraid to admit it. Young colleagues would agree to the vaccination partly for fear of legal consequences.

She wanted how he would deal with the criticism of the lack of empathy in view of the many corona deaths Berliner Zeitungthen know. Florian F. replied that firefighters experience so much suffering every day, so many people catch them. This work requires everyday empathy:

“I certainly didn’t become a firefighter because the pay is great and the hours are so relaxed. I joined the fire department to save people. I would like to know where and how these critics are helping people.”

The newspaper also confronted the fire brigade employee with the valuation of the Green politician Janosch Dahmen, who, after the video appeared, questioned the qualifications of the protagonists for the health care system. At this point, the fireman blamed the Green politicians for the division in society, just like the media. These splitters would have ensured that people with a different opinion would now be seen as idiots, Reich citizens and Nazis or as lacking empathy:

“The media is waging a campaign against unvaccinated people and against people who are critical of the corona measures,” said the man in the video.

In addition to the unbalanced reporting, Florian F. criticized the Berliner Zeitungalso the lack of scientific knowledge, especially when dealing with facts and figures:

“We have to understand and accept living with it. It’s not the virus that paralyzes us, it’s the fear of it.”

With regard to vaccinations, he fears that the bad end could still come:

“If even a fraction (of health care workers) have side effects that have such an impact that affected firefighters, nurses and others in health care are unable to do their jobs, then we have a huge problem here.”

Florian F. finally told the journalist his motivation for publishing the video statement:

“With my statements in the video, I tried to give people the courage and a voice that we can defend ourselves, that we don’t have to accept everything that is told to us.”