Podoljaka’s frontline analysis: Russia’s Ukraine campaign after the withdrawal from Kharkov – what’s next? 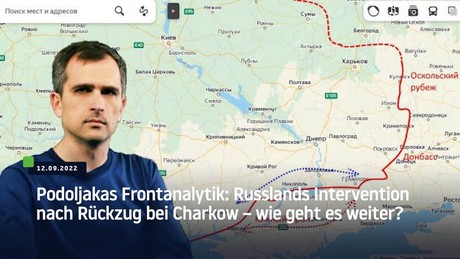 The topic of the latest issue of Frontline Analysis with Yuri Podoljaka is devoted to the perspective of Russian intervention after the surrender of the initially liberated parts of the Kharkov region.

With pro-Russian troops withdrawing from Izyum and Balakleya behind the Oskol River and building defense lines there, a refocusing on the southern front seems to be on the agenda.

Because unlike on the Kharkov front, where troop movements for the Russian side took several times longer than for the Ukrainian side, Kyiv does not have such a logistical advantage there. There are also several possible directions.

Yuri Podolyaka is a Ukrainian political blogger (his channel on YouTube had 2.6 million subscribers before it was deleted by the platform’s administration) and journalist from Sumy (he has lived in Sevastopol, Russia since 2014), whose insights in the period from the beginning of the intervention became increasingly popular in the Russian media.

His analytical outputs come up with only a few numbers – but he gives a good understanding of the spatial extent of the respective developments by working with maps and occasionally offers short-term forecasts.

On the one hand, Podoljaka uses openly accessible data as sources: These are reports from eyewitnesses in the social media as well as reports from the Russian and Ukrainian defense ministries. So, to use the current intelligence jargon, Yuri Podolyaka is primarily an OSINT analyst.

On the other hand, he cites insider sources: In addition to those in the people’s militias and security organs of the People’s Republics of Donetsk and Lugansk, these are those in the Ukrainian security and government authorities, which he says he still maintains due to old relationships from his time as a Ukrainian journalist.

more on the subject – Live ticker Ukraine war: More and more reports of massacres of civilians in the Kharkov region

Moldova: Air Moldova plans to sue the government for banning its Moscow flights

Moscow on EU visa restrictions: No rush to retaliate for EU’s ‘further stupidity’

In view of Turkish invasion plans: Assad opposes proposals for rapprochement with Turkey

Moscow on EU visa restrictions: No rush to retaliate for EU's 'further stupidity'