Election thriller in Sweden: Preliminary final result not before Wednesday 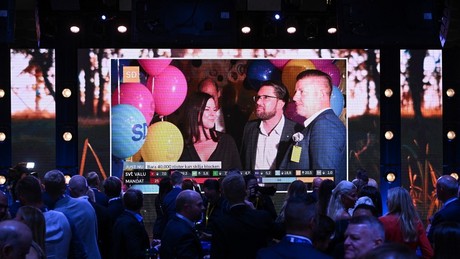 The dramatic election thriller in Sweden is being extended: the preliminary result of the Swedish parliamentary elections should be known on Wednesday at the earliest. Only then are the votes from abroad and late, prematurely cast votes counted, the electoral authority told the news agency early Monday morning TT With. Initial forecasts initially saw Prime Minister Magdalena Andersson’s centre-left camp in the lead. After about half of the votes were counted, the whole thing then tipped in favor of the conservative challenger Ulf Kristersson – also thanks to the historically strong performance of the national conservative Sweden Democrats (SD).

A provisional result was originally expected on election night. Although Kristersson’s Moderate Coalition Party has to reckon with its weakest election result in 20 years, a conservative four-party bloc including the national-conservative Sweden Democrats was 0.9 percentage points ahead of Andersson’s camp after counting almost all votes. The electoral authority put his expected share of parliamentary seats at 176 mandates, Andersson’s camp at 173.

All chairmen of the eight parliamentary parties emphasized on election night that the race was not over yet. “We don’t know how this will end,” said Kristersson. At the same time, he emphasized that he was ready to form a new and energetic government.

In all likelihood, he will be dependent on a partner who has always been “left out” in elections: the leader of the Sweden Democrats, Jimmie Åkesson. “Today we are a really big party,” he said in front of cheering party supporters. In 2010 the party received 5.7 percent of the votes – now it is likely to be 20.7 percent. This means that the Sweden Democrats are for the first time the second strongest party, ahead of the Conservatives. This gives Åkesson legitimate claims. “Our ambition is to be part of the government,” he said.

Regardless of the outcome of the election, Sweden is likely to face a lengthy phase of government formation, as was the case after the 2018 parliamentary election. Because even within the two blocs, the parties disagree on several issues. Finding political majorities has become difficult in the Scandinavian EU country, above all due to the strengthening of the Sweden Democrats, who have been able to continuously improve their election results in recent years. A result beyond 20 percent will now be a record for the Åkesson party. Only the Social Democrats – the traditionally strongest party in the Scandinavian EU country – are still clearly ahead of them after gaining around 30.5 percent.

Andersson was only elected prime minister of Sweden in November 2021, succeeding her social democratic party colleague Stefan Löfven and becoming the first woman ever. Since then, the former finance minister has led a minority government made up exclusively of Social Democrats, which has so far depended on the support of the liberal Center Party, the Left and the Greens in parliament. Meanwhile, challenger Kristersson is counting on Christian Democrats and Liberals in addition to his Moderate Party and, for the first time, openly on the support of the Sweden Democrats (SD).

more on the subject – NATO northern expansion: human rights on the sacrificial table

Poland: “We are Europe’s development engines”

Despite all assurances: Fresh Russian bottling of Coca-Cola spotted in Moscow

Live ticker Ukraine war – Macron: Negotiations are the only way to resolve the conflict

Poland: "We are Europe's development engines"