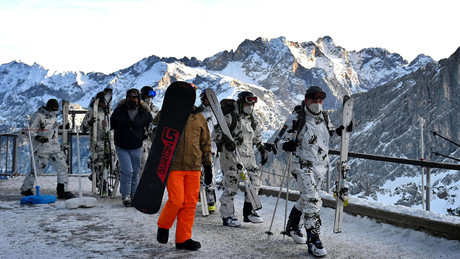 NATO members have been doing everything possible in their efforts to provide the Ukrainian army with enough clothing and equipment for the coming winter, the German magazine reportedThe mirror in its current edition. Apparently, Kyiv had asked the alliance to urgently provide the necessary equipment before the wintry weather set in.

Ukrainian Defense Minister Alexei Reznikov had said loudly Spiegel wrote a letter to NATO Secretary General Jens Stoltenberg at the end of July, in which he called on the military alliance to provide up to 200,000 Ukrainian soldiers with cold-resistant field tents and clothing. The combat uniforms and equipment must be delivered as soon as possible, the minister added, according to the magazine.

Since then, several NATO countries have scoured their warehouses for the supplies they needed. The Alliance confirmed that Spiegelthat there are contacts within the Member States on this subject. According to reports also dated Spiegel So far, the United States and Canada, as well as Sweden and Finland, have jointly promised supplies that could cover up to 50 percent of the Ukrainian army’s needs.

However, various circles from the environment of the NATO members argue that the largest part of the existing stocks should be reserved for the respective national armies, the wrote Spiegel. The alliance has reportedly offered to pay for the uniforms and equipment handed over to Kyiv from the so-called NATO Trust Fund, which is now worth $40 million.

Germany is also reportedly planning to join the effort, although the Bundeswehr has previously shown difficulties in providing its own troops with the necessary equipment, he said Spiegel further. By sending winter clothing and equipment for field camps, Berlin can “make an important contribution to the defense of Ukraine before the approaching winter,” said Defense Minister Christine Lambrecht.

The Bundeswehr is loud Spiegel rather “critical” about handing over their equipment to the Ukraine. Lambrecht himself had previously repeatedly pointed out that the Bundeswehr was reaching the limits of its capacities when it came to rearmament in Ukraine. It was only last February that the Bundeswehr made negative headlines because of the lack of winter clothing. The military commissioner Eva Högl had complained about the alarming lack of equipment among the Bundeswehr soldiers who are supposed to deter the Russian army at the Rukla military base in Lithuania. The troops lacked warm jackets, but also adequate underwear, if they had them Augsburg General said.

more on the subject – US General: NATO must face tough choices before they are forced upon it

Production cuts at OPEC+ and so far no nuclear deal with Iran: Europe is the big loser