Protests in Prague with 100,000 participants: "We’re taking our country back!" 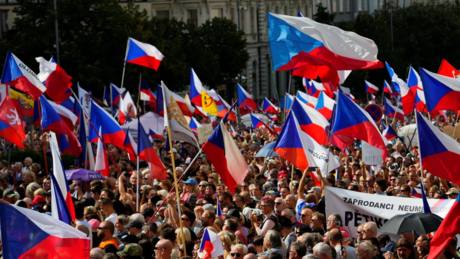 At a large rally on Prague’s Wenceslas Square, more than 70,000 participants, according to official figures, but 100,000 according to the organizers, called for the resignation of the government. The rally took place only one day after a motion of no confidence in the government under Prime Minister Petr Fiala was held in the Czech parliament, but failed.

The largest opposition party ANO had not called. Behind the rally was an alliance ranging from conservatives to the Communist Party enough. The main trigger for the protests is likely to be the economic situation in the country. In Czech Republic amounts to inflation 17.2 percent. It’s not just energy prices that are driving inflation, but food prices have also risen significantly.

Why isn’t this possible in Germany?More than 70,000 people in the central square of Prague are demanding the resignation of the governmentThe dissatisfaction of the citizens of the Czech Republic caused by rising energy prices. pic.twitter.com/UHbvCcXfqq

Compared to its neighboring countries, the Czech Republic still has a comparatively large amount of industry, such as the Skoda works, which now belong to the Volkswagen Group, and the chemical industry. The existence of this industry is threatened by the lack of energy in the same way as in Germany. In addition, if the country, which has no connection to the sea, does without oil and gas from Russia, it will be completely dependent on the goodwill of its neighbors for its energy supply. In addition, the Czech Republic, with its 11 million inhabitants, has taken in 400,000 refugees from Ukraine.

The government in Prague fully supports the course of the EU. That can also be done at the Reaction of the Czech Prime Minister on the protests. “It is clear that Russian propaganda and disinformation campaigns repeatedly appear on our territory, and some simply succumb to them,” Fiala said. Interior Minister Vít Rakušan did not see increasing material needs, but rather Putin behind the protest. “Dividing society is one of the goals of the hybrid warfare we’re dealing with. We can’t let it do that. That’s why we’re working on solutions that will lessen people’s fears about the future. But those solutions don’t lie in closer to Putin’s Russia, I don’t agree with the speakers.”

According to the organizers, every Czech household should be entitled to three megawatt hours of free electricity. In addition, one of the demands of the alliance was that its representatives should be authorized to conclude energy supply contracts.

“We’re taking our country back,” they said at the beginning of the rally, which lasted three and a half hours. The call for the rally was also about military neutrality and the loss of sovereignty to supranational structures. “The Czech Republic must free itself from direct political subordination to the EU, the WHO and the UN,” the appeal said.

“If the government does not resign by September 25”, so the organizers, “according to the constitution of the Czech Republic, we declare the right to protest at a nationwide demonstration and announce measures to force the resignation. We are already negotiating with trade unions, companies, farmers, mayors, transporters and other organizations to declare a strike ” they warned.

more on the subject – Energy crisis: Czech minister warns of danger of revolution

Forward to Fascism – The Making of Ukrainian Nationalism

Ukraine: Boy shoots his brother with an anti-tank weapon at a weapons exhibition

Ukraine: Boy shoots his brother with an anti-tank weapon at a weapons exhibition