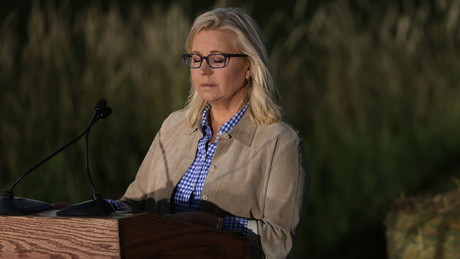 Republican MP Liz Cheney, Donald Trump’s best-known inner-party critic, saw it as her personal mission to attack and boycott the former US President at all levels with regard to his future political ambitions. Now Cheney had to accept a severe setback.

In the US primaries in the state of Wyoming, she lost her mandate for the upcoming US Congress to Republican party colleague Harriet Hageman information of the Wall Street Journal (WSJ). According to the preliminary final result, Hageman is 65.1 percent ahead of Cheney with 30.3 percent. Cheney was first elected to Congress in 2016.

It is considered proven that Trump actively promoted and supported the lawyer Hageman, who was previously almost unknown outside of the state, in the background. So explained der US-Sender ABC News on August 16, his viewers: “Who is Harriet Hageman, the Trump-backed candidate running against Liz Cheney?” Described with US-typical unambiguous formulations ABC Newsthe event surrounding the area code:

“In many ways, Tuesday’s GOP (Grand Old Party) primary race for a vacant seat in Wyoming Congress is a war – vicariously – between former President Donald Trump and someone he deems disloyal.”

Given that Cheney actively voted to impeach the former US President for his actions related to the January 6 Capitol riot, their defeat represents a triumph for Trump that should not be underestimated. So does his son, Donald Trump Jr. immediately expressed his joy at the defeat on Twitter:

“Bye-bye, Liz Cheney. The good thing is you don’t have to pretend you’re from Wyoming anymore.”

Bye bye @Liz_Cheney. On the bright side at least you won’t have to pretend to be from Wyoming anymore. pic.twitter.com/DMcj3ua42d

Cheney comes from a US political dynasty. Her father, Dick Cheney, was the 46th Vice President of the United States under President George W. Bush from 2001 to 2009 and Secretary of Defense of the United States from 1989 to 1993 under his father George Bush. After the events surrounding the storming of the US Capitol in January 2021, Cheney made it a priority to prevent “Trump from ever going near the Oval Office again”. She was vice chair of the investigative committee into the attack on the US Capitol. beginning of August shared them to the viewers of the US broadcaster CNNreiterates her personal view of Trump and the Capitol events with:

“I think he is guilty of the gravest breach of duty by a president in the history of our country.”

In February 2021, the Senate acquitted Trump in the trial involving the January 6 riot. Trump commentedon his own social media platform Truth Social, in a smug tone familiar to him, the defeat of Cheney with the following words:

“This is a great result for America and a complete rebuke of the unelected Committee of Political Scribes and Criminals. Now it can [Cheney] finally disappearing into the depths of political oblivion, where I’m sure she’ll be much happier than she is now.”

According to US media, Cheney’s stance on the Jan. 6 riots and her leadership role on the committee were considered a key factor in Republican voters choosing the unknown Hageman after all. Commenting on their victory, Hageman said, “We can get rid of established politicians who believe they have risen above the people they represent and are meant to serve.”

In your Resignation speech On the other hand, according to the US media, Cheney announced on a ranch in Wyoming that she “could easily have run for a fourth term.” But that would have required her to agree with “Donald Trump’s lies about the 2020 election,” which she was not willing to do. US media estimates that Cheney’s ouster is “the latest sign of Trump’s continued influence on the Republican Party.”

More on the subject – Trump raid: investigative documents are not released – threat to national security