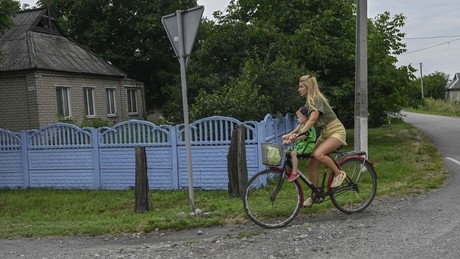 In an article for France Media Agency French journalists reported on the mood of the population in eastern Ukraine. The report’s authors point out that “many locals have no doubt as to why these areas are under attack — they say Ukrainian troops holed up in abandoned houses and schools.” Pavel Kirilenko, governor of the Kyiv-controlled part of the Donetsk region, also confirms that many people are waiting for Russian peace. In doing so, he explained the Russian military’s precise knowledge of the stationing of Ukrainian troops in houses and schools in cities of Donbass.

School No. 23, intended for 500 students, was one of the first to be destroyed in Kramatorsk. According to Denis Sysoyev, a local education official, seven other schools in the city have been damaged since the war began. The article states that school #23 was used as a food storage facility. But Yevgeny, a 70-year-old wood turner, explained to French journalists why the school was damaged: “The Russians are targeting Ukrainian soldiers.” “I don’t know if they were still at school (when the building was hit) but we could see them coming and going here regularly,” the retiree said. “And there are many ‘well-meaning’ people in our area who want to help and inform the Russians.”

Natalia, the mother of three students at this school, agrees. Additionally, she mentioned a group of locals on Telegram Messenger, where she said the comments leave no doubt as to “who is pro-Russian and who isn’t.”

An interview with US journalist Ann Coulter attracted no less attention. In an interview with well-known British TV presenter Piers Morgan, she accused NATO of provoking the Ukraine crisis and called on the West to stop supporting Kyiv. “Ukraine has historically been a zone of influence for the Russian Empire. As for NATO, after the collapse of the USSR, the alliance no longer has a meaningful purpose, but we continue to expand,” Coulter said.

At the end of last week, the British journalist Rod Liddle accused in an article for the Times his Western counterparts to hide the truth about Russia’s significant achievements in special operations. Instead, the journalists exaggerate the capabilities of the Ukrainian Armed Forces (AFU) and “any statement, however ridiculous, made by a Ukrainian politician is taken at face value.” Such coverage is wishful thinking, Liddle concluded.

The political scientist and former editor-in-chief of the newspaper Kiew Telegraph, Vladimir Skatschko, considers such reports and statements by journalists as attempts to find a soft basis for the coming overthrow of the AFU and the Kiev regime. “The French journalists provide the Kiev authorities with an alibi in case they fail completely. One can always resort to such reports and claim: ‘We warned you.’ In this way one can not only explain the defeat of the AFU, but also try to punish those who are involved in the Ukrainian crisis and future failures,” says Skatschko.

Such publications in the foreign press show that “there is still common sense and the ability to predict” in the West. “Sometimes Western journalists go too far – from total rejection of Russia to total enthusiasm,” said the expert.

And political scientist Vladimir Kornilov recalled that reports from the front line in Western media about what Donbass residents actually think of Ukrainians have been published time and again. “There was such coverage from Severodonetsk and Lisichansk when Ukrainian troops were still in those cities. The locals, even though they knew about the troubles to come, still spoke of waiting for the Russians. Generally speaking any halfway objective journalist, of which there are few in the French media, could not have failed to notice this.However, this sometimes seeps into reports by Western journalists and even into statements by some Ukrainian figures, officers and soldiers, who openly admit that Donbass residents are certainly not patriots of Ukraine,” Kornilov stressed.

The interlocutor added that the locals he talks to are looking forward to Russia. “This is the majority, and there are many reports from Western journalists who were there, not from those who write from London. The majority of Donbass residents are waiting for Russia,” stressed Kornilov.

Alexander Perendzhiev, associate professor of political science and sociology at the Plekhanov Russian University of Economics and a member of the Expert Council “Officers of Russia”, also notes that the report of the France Media Agency stands out against the background of mendacious materials on the situation in Donbass. It is an attempt to present the true picture, saying that local residents expect the Russian military as liberators and that Ukrainian troops are perceived as occupying foreign territory. In the future, the number of such publications in the West will only increase.

“It seems to be an attempt to understand what the residents of Donbass think. Now is a turning point in the system of public opinion in the West. In this specific case, France could be the champion,” believes Perendzhiev.

According to the expert, such efforts help to understand the balance of power in Donbass and why “the allied Russian coalition is definitely moving forward.”

“I hope that the French already understand that Kramatorsk and Slavyansk are at the origin of this ‘Russian spring’. Perhaps the journalists wanted to find out whether the mood of protest is still alive because Ukrainian troops entered these cities, a punitive expedition took place there, which should have wiped out the chaos. But now the impossibility of such a cleansing action is shown when there is a secret mood of protest,” the interlocutor concludes.

more on the subject – So many mini-Stalingrads – Why don’t the Germans see what’s happening in Ukraine?