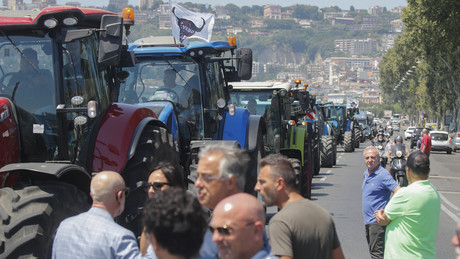 As part of its so-called Green Deal, the EU Commission wants to ban the use of chemical pesticides in protected areas. But even outside of these, the use of pesticides is to be reduced by 50 percent by 2030. In the Netherlands, farmers have therefore been protesting for weeks against the EU agricultural and environmental policy, which is a threat to their existence. But there is also increasing resistance among German farmers to the plans, which would affect around 4 million hectares of usable land in Germany.

In Germany, the farmers’ associations are therefore calling on farmers to support the protest actions of their Dutch colleagues and to offer “massive resistance” to the environmental regulations enforced by the EU. The farmers ran “a storm against the EU Commission’s plan to largely ban the use of pesticides in the EU,” said the Westfälisch-Lippische Landwirtschaftsverband (WLV) on Monday in Münster. The Brussels project was seen by the farmers as an attack on the livelihoods of their domestic farms. One was therefore determined “to offer massive resistance to this”, it said in the Explanation further.

Association President Hubertus Beringmeier described the EU Commission’s plans as “more than morally questionable” given the tense global food supply situation. After careful examination of the proposals, it can now be seen that “the Brussels Eurocrats” want to impose a total ban in so-called “sensitive areas”. If the EU Commission’s proposal were to be adopted, there would hardly be any land left in Germany for the cultivation of urgently needed food and animal feed, the farming association warned:

“We will take action against this with all determination and also take our protest to Brussels.“

According to estimates by the German Farmers’ Association (DBV), around 4 million hectares of arable land would be affected by the planned EU environmental protection regulations in Germany alone, and thus around a quarter of Germany’s arable land. Holger Hennies, President of the Lower Saxony Landvolk, was also stunned by the impending forced closures. “The farmers’ association has rolled over and believes that around half of the arable land in Lower Saxony would be affected,” said Hennies NDR. There are companies that are completely in such areas. In his estimation, they would then have to close down.

In view of the threat of “forced closures,” representatives of the organization “Agriculture connects Germany (LSVD)” are increasingly calling for protests on social media against the environmental package planned by the EU Commission decentralized protest actions will begin in August, with the first demonstration planned for August 15 in front of the Federal Ministry of Agriculture in Bonn.

The promise of being able to work there without restrictions was broken. Then, as a farmer, you should return to good professional practice. #No expropriation by ideology https://t.co/irXQfHRIv0

There have also been isolated protests in this country. But the protest actions so far do not go far enough for the representatives of LSVD. “Is everyone aware that the Natura 2000 regulation that Holland is making now applies to every European country,” the organization said on Twitter in July:

Also the board members of Land creates connection (LSV) Bavaria, Rainer Seidl and Claus Hochrein, shoutedIn view of the impending forced set-aside of agricultural land, farmers and citizens to participate in the growing protest movement:

“In view of these prospects, not only should there be thousands upon thousands of traffickers honking their horns in Berlin and Brussels, but also hundreds of thousands of citizens fighting for their food security.”

Just a thought: is it clear to everyone that the Natura 2000 regulation that Holland is making now applies to every European country? That means expropriations everywhere, company closures, losses of colleagues, etc… The idea that it only affects the others is misplaced.

The exuberant EU agricultural and environmental policies are not only increasingly leading to despair among farmers, but also to growing resistance within the professional group. The General Secretary of the German Farmers’ Association, Bernhard Krüsken, therefore assumed weeks ago that the previously manageable protest actions by farmers would be expanded to the point of blockades:

“In the event of expropriations and forced closures, there would also be massive protests here. The economic pressure on farmers is enormous in any case and will be further increased by further legislative restrictions.”

In June, the EU Commission presented a proposal for a regulation according to which the use of pesticides should be reduced by 50 percent by 2030. For a number of sensitive areas there should even be a complete ban on the use of pesticides. Farmers’ associations warn of a threat to food safety.