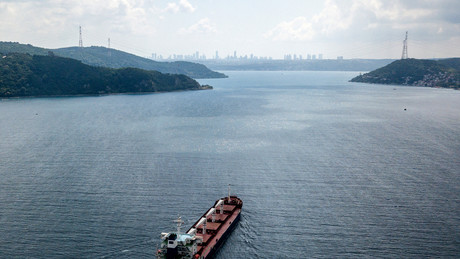 According to the New York Times None of the ships that left Ukrainian ports on Tuesday loaded with Ukrainian grain are headed for African countries, which are most at risk of famine. The first ship to set sail through the so-called “grain corridor” in Black Sea waters was informed shortly after departing that its cargo had been rejected by its original customers in Lebanon, citing the massive delay in delivery.

Since the agreement on the transportation of Ukrainian grain through the sea corridor came into force on August 1, ten ships have left Ukrainian ports, mainly bunkering animal feed. One ship headed for Britain, another for Ireland, while other freighters made their way to Turkey, Italy and China. So none of the ships seemed to be destined for Yemen, Somalia or other African countries threatened by “catastrophic famine” like that New York Times on Tuesday reported. The day before, President Vladimir Zelenskiy had assured his counterpart Mokgweetsi Masisi from Botswana that Ukraine was ready “to continue to be a guarantor of global food security”.

The first ship to reach its destination was the one flying the Turkish flag “Polarnet”, which docked in Derince, Turkey, on Monday with 12,000 tons of corn. Foreign Minister of Ukraine Dmitry Kuleba celebrated his arrival and wrote down Twittersending “a message of hope to every family in the Middle East, Africa and Asia,” adding:

“Ukraine will not let anyone down.”

However, most of the 20 million tons of grain stored in Ukrainian ports over the past few months is for animal feed only and not intended for human consumption, according to experts working at Associated Press quoted became.

The first ship to leave Ukraine under the “Grain Corridor” agreement transported 26,000 tons of chicken feed destined for Lebanon. The Sierra Leonean-flagged freighter Razoni left Odessa on August 1 – only to be turned back last Monday after the Lebanese buyer refused to accept the shipment, saying it was several months late .

Ukraine accounts for about 5 percent of world grain exports, while Russia’s share of the world market is four times larger. Kyiv has accused Russia of “blocking” Ukrainian ports, while Moscow has denied this, accusing the Ukrainian military of mining the Black Sea sea lanes.

Eventually, the United Nations and Turkey brokered an agreement to arrange safe passage for ships bound to call at Ukrainian ports. Departing ships are inspected to ensure they are actually carrying grain, fertilizer or food, while incoming ships are mainly searched for weapons.

The agreement was originally intended to include solutions to Western sanctions against Russian shipping, which effectively prevent Russia from delivering food, fertilizer and other goods to customers in Africa and South America. In an op-ed published in several major African media outlets last month, Russian Foreign Minister Sergei Lavrov vowed that Moscow would “take all measures” to secure the promised supplies.

The resumption of Ukrainian grain exports is considered important for stabilizing food prices on the world market. For the time being, however, Kyiv will only allow three ships to depart daily for safety reasons. In view of the millions of tons of grain in Ukraine, however, experts doubt that the removal is completely manageable. Around 570 shiploads would have to be handled for the stored 20 million tons.

more on the subject – Sanctions: US ambassador warns African countries against shopping in Russia