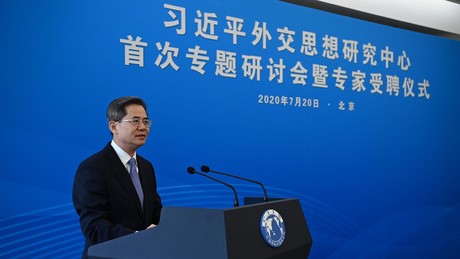 Chinese Ambassador to Britain Zheng Zeguang has been summoned to the British Foreign Office over Beijing’s recent actions and statements on Taiwan. A statement issued on behalf of British Foreign Secretary Liz Truss said:

“I have instructed officials to summon the Chinese ambassador to explain his country’s actions. We have witnessed increasingly aggressive behavior and rhetoric from Beijing in recent months, threatening peace and stability in the region. The UK Calls on China to resolve any differences peacefully without delay and without threat of violence or coercion.”

China has been conducting a series of military drills along the coast of Taiwan for the past week amid heightened tensions in the Taiwan Strait after US House Speaker Nancy Pelosi’s trip to Taipei on Aug. 2-3. Beijing has repeatedly warned Washington that it would take retaliatory action if the visit of Pelosi, who holds the third most important post in the US government hierarchy as Speaker of the House, took place. On August 4, the Chinese military began large-scale maneuvers and rocket fire in six areas of Taiwan’s waters. The exercise was supposed to end on Sunday noon local time (6:00 a.m. Berlin time), but has been extended indefinitely, according to the Chinese Defense Ministry.