Migration lobby in the Chancellery 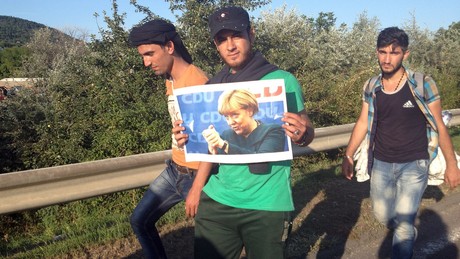 Whether the infamous “Refugee Deal” with Turkey, which opened the floodgates for Erdoğan to blackmail the EU, or a large-scale one “Airlift”for the Ukrainians, which is supposed to bring back memories of the Berlin Airlift during the (first) Cold War – the lobby organization European Stability Initiative (ESI) is at the forefront when it comes to lobbying for open borders and unlimited migration.

Founded in Sarajevo of all places in 1999, fights The ESI, according to its own statement, is at the forefront “to defend Europe against illiberal forces.”

As a inquiry The AfD parliamentary group under the leadership of their foreign policy spokesman, Petr Bystron, revealed that since 2018 the director of ESI, Gerald Knaus – the brains behind the refugee deal – has met six times with high-ranking representatives of the federal government. For example with the then Development Minister Müller (CSU) or, in April of this year, in the middle of the Ukraine war, with the head of the Chancellery, Wolfgang Schmidt – the right hand of Olaf Scholz (SPD). The Federal Ministry for Economic Cooperation and Development was also “advised” by ESI until 2021.

It is not difficult to imagine what comes out of such “suggestion services”. It would also be quite conceivable that the migration lobbyists of the European Stability Initiative would also shuffle through the corridors of the Bundestag. However, the ESI does not even appear in the Lobby register of the German Bundestag. A (right-wing) populist who thinks bad about it.

The fact that open borders go hand in hand with politics that is not quite tight has been a more than justified suspicion for years by all those who are fighting for an open exchange of opinions in the best Germany of all time. While the former are “in”, the latter is “out”.

This applies in particular to the Federal Foreign Office. While Annalena Baerbock cuts a fine figure worldwide in a bulletproof vest (that’s how it was beautiful figure in Italy originally Not meaning), hundreds of thousands of euros of German tax money flow into nonsensical pseudo-measures.

The project is an outstanding example that deserves to be included in the Federal Audit Office’s list of the worst wastes of federal tax money Rumours about Germany. Since the migration crisis in autumn 2015, hundreds of thousands of euros have been spent on this Federal Foreign Office campaign to reduce illegal migration. But instead of preventing illegal migrants from making a life-threatening journey across the Mediterranean, the campaign’s website has mostly been from Germany in the past visited.

Are there so many Germans who are fleeing the prevailing conditions? Questions from a reading citizen to which even Annalena Baerbock has no answer. And as is well known, the best always comes last: When the evaluation was due, the migrants, who are supposed to be detained before entering the country, were not asked at all. Instead, a company has more than 100,000 euros in taxpayer money for an “evaluation” painted.

Couldn’t you use common sense and save the 100,000 euros? The employee who gets the minimum wage in the low-wage sector has to work at least 9,569 hours (gross!) to keep the money in his hands, which is now quickly evaporating. But as our glorious foreign minister once said:

“This will ruin Germany (pardon: Russia)!”

dr Anton Friesen, Sci. Employee in the German Bundestag and former member of the Bundestag (Foreign Affairs Committee and Committee on Human Rights and Humanitarian Aid). The author only represents his own opinion in the article.

Thanks to the Ukraine war and the “special assets” of the Bundeswehr: Rheinmetall makes record profits

Thanks to the Ukraine war and the "special assets" of the Bundeswehr: Rheinmetall makes record profits