For the record: Lauterbach confirmed for the fall – no school closures, no killer virus 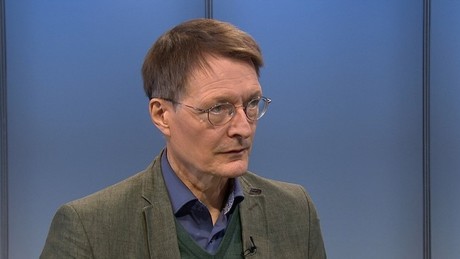 On July 28, ARD announced an interview with the current Federal Minister of Health, Karl Lauterbach (SPD), via its social media channels. Interested users could use the opportunity to ask the minister their concerns and needs regarding medical and social problems of the present. the ARDEditors offered: “Ask him your questions in the comments now – the answers will be available live tomorrow from 3 p.m.”. Lauterbach casually added, still in the intoxication of a supposed stand-up comedian, with the words: “Feuer frei!”

The Cicero-Store titledon the subject of Lauterbach as a solo entertainer (on the Amazon-Prime Channel), unfortunately behind a payment barrier: “Karl Lauterbach’s comedy appearance on “One Mic Stand” – just bad. Really bad”. The opening of the interview with the Federal Minister of Health was also bad, really bad. Nadine Bader, TV correspondent in the ARD-Capital studio, the conversation began rather irritatingly at the level of a simple fan girl. More regular after weeks criticism to Karl Lauterbach and augmented irritations With the start of the Interviews realize – a feel-good appointment follows. Bader literally:

“Today we are talking to the minister, who won many hearts even before he took office. Many people on social media demanded ‘We want Karl’ at the time.”

The request was complied with, says Ms. Bader enthusiastically: “We have received numerous, thousands, (questions) from users”. thousands? It would be interesting to see how that would turn out ARD-Capital Studio designed the pre-selection of topics. After brief explanations of his most recent trip to the US, the minister naturally knew all of the current US colleagues contacted “personally” long beforehand, and the block of interviews began with Lauterbach’s statements on the need for a fourth vaccination. In his reply, Lauterbach variably pointed out the supposed fact that he was either misquoted or misunderstood and was. According to his perception, there is nothing to criticize about him, about his fickle statements.

On the subject of upcoming updates of active ingredients and their effectiveness, the minister gave a surprisingly honest summary of the status quo of vaccine qualities:

“The good news is, they are coming (…) We will have adapted vaccines in September (…) Both very good vaccines. What these vaccines can do compared to the current vaccine, you significantly reduce the risk that get infected at all.”

For the record: Both modified, i.e. adapted vaccines from the companies BioNTech and Moderna are not yet available on the market, not yet approved, but the Federal Minister of Health already knows: “Both very good vaccines” and above all more effective because:

“The current vaccine is also very good for preventing serious illnesses and death, but you are not really well protected from infection. The protection is only 35 percent.”

Was the moderator followed up? no Were there any relevant questions on the subject among the “thousands” of submissions? Maybe, or not in the preselection of ARD-Editorial staff. So much has already been revealed. To the constantly dynamizing phenomenon of manifesting life-restricting vaccine side effects for vaccinated citizens, there will be not one question, no explanation, absolutely nothing in the entire interview. To put it mildly, an irritating process. To put it more bluntly, a scandal given the reality of the suffering in Germany.

Before the ball was passed in a purely manipulative manner to the minister’s favorite hobby-focused topic, Long-COVID, Lauterbach made the two statements already mentioned on the points of the killer virus or killer variant and possible school closures in the fall. Lauterbach’s personal perception of the killer virus:

That’s how he is, the minister. He doesn’t mean it the way he puts it, and if he does, he’s simply misunderstood. First time in April titledfor example the Bild newspaper: “Lauterbach warns of an “absolutely killer variant”. In May that stopped Editorial network Germany to know: “Federal Minister of Health Karl Lauterbach (SPD) admits that in his warning of a “killer variant” he chose the term “not optimally””, so that the Bild newspaperagain on July 28th the title could: “Lauterbach fears a severe Corona fall: “Must be prepared for a killer variant”. Now the latest assessment by Federal Minister of Health Lauterbach, for the record, from the most recent ARD interview:

“I don’t think we’re going to get a killer virus at this point. I think that’s very unlikely.”

Towards the middle of the conversation, safe ground for Lauterbach. The long-COVID risk, also “for middle age groups, younger people”, is still “considerable”. Here is what the minister said, please do not misunderstand:

“One can complain about one wrong breath, one can ruin one’s life.”

The risk perception in the population, “especially among the younger ones”, is “not correct at the moment”. In connection with an “innovative agency”, this would be counteracted. Means more taxpayer money squandered on insanely expensive government campaigns. In Germany, according to Lauterbach, there are “many long-COVID sufferers, hundreds of thousands”. The minister therefore sees golden sales markets lighting up at the end of the long COVID tunnel. A sentence followed that, depending on the perspective, could make you smile or shake your head. Lauterbach literally:

“If a company can bring a drug here, it pays for itself in the first six months. That would be extremely profitable, it would be plausible. Pharmaceutical companies around the world are really working on that.”

Ms. Bader at least strutted into it, for example through possible user questions on the topic Post-Vac-Syndrom, a reality that can now be demonstrated tens, if not hundreds, of thousands of times in the physical impairments of those affected? No, she summarized her insight at the end of Lauterbach’s monologue: “So, once again, your appeal – to be vaccinated”.

But there would have been “many” letters on the subject of cooperation with the FDP. Also on the subject of the nursing shortage “very, very many” questions. Lauterbach assured that he had a “great appreciation for nurses”. But they have to be vaccinated, Ms. Bader could have added, to point out the minister’s verbal blunder in June of this year, when he clearly spoke out at a protest event against the nursing shortage and the facility-related vaccination requirement for nursing staff out of tone. Lauterbach then verbatim:

“You have no right to be here (…) You have made no contribution and I find it outrageous that you still have the nerve to abuse this legitimate demonstration of those who worked (…)Your work has not contributed.”

This didn’t happen either. Lauterbach was asked intensively about the many questions users had about a gynecological disease, endometriosis. According to Lauterbach, who understands women, he is in favor of “a research program from the Federal Ministry of Research”. As an epidemiologist, he could also “say something about how many women have it.” On the important question of whether and when there will be menstrual leave in Germany like in other countries, Lauterbach noted that this was a question for the Minister of Labor. “I don’t want to anticipate Hubertus Heil here.” Professional modesty, a ministerial virtue? If it suits him.

With regard to the lack of free psychotherapy places in the country, “we have to start at several points,” said the minister. There were no questions about the psychological effects of the corona policy, especially among the children and young people in the country, i.e. from the moderator. Certainly in the “thousands” of questions from users. The feel-good interview ended after just under thirty minutes. Ms. Bader thanked her politely for “taking so much time for the many user questions”.

Which the ARD capital studio presented to the minister in a friendly way in a purely manipulative pre-selection in an editorially bite-sized and easily digestible manner.

The EU planned economy and the oil price cap

Kremlin spokesman Peskov: EU tribunal on Ukraine will have no legitimacy

Moscow: Electric buses are to be operated with recycled frying oil from McDonald’s successor