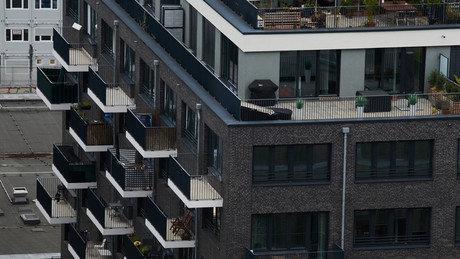 People in Germany have to dig deeper and deeper into their pockets for houses, apartments and land. From 2010 to 2020, used condominiums have become 85 percent more expensive, single and two-family houses by 75 percent, building plots by around 65 percent, according to the market report of the official appraisal committees. The corona crisis has not changed the trend. “An end to the price spiral is not in sight.”

The committees evaluate around one million notarized purchase agreements each year. According to this, more money flowed into German real estate in 2020 than ever before: 310 billion euros. With a plus of one percentage point, however, the total did not grow as strongly as in previous years.

According to the Federal Statistical Office, it is a record increase for the second time since the beginning of 2000. In Berlin and Frankfurt am Main, prices rose by 14 percent. In rural areas too, house prices rose by around 15 percent compared to the same quarter of the previous year. In the case of condominiums, the increase was 11.2 percent.

The regional differences continue to grow. In Munich and the surrounding area, houses cost an average of around 11,000 euros per square meter of living space. In the Kyffhäuserkreis in Thuringia, however, 500 euros are sufficient, as is the Mansfeld-Südharz district in Saxony-Anhalt.

A good 1.3 million euros are due for a 600 square meter building plot in Munich – in parts of Thuringia and Mecklenburg-Western Pomerania it is less than 11,000 euros.

Where it used to be expensive, prices rose particularly:

“The prices for residential real estate have risen so sharply, especially in the metropolises, that the markets here now appear to be overheated.”

Accordingly, prices have also risen significantly on the North and Baltic Seas and in the foothills of the Alps.

In the opinion of the experts, decisive factors remain low interest rates, too little building land and too few apartments, capacity bottlenecks in the construction industry and rising construction costs.

“The expansion of the available housing remains the decisive factor for a trend reversal in the housing market. In addition to the construction of new apartments, it is important to get more out of the building stock – for example through renovations and extensions or redensification.”

In the big cities, vacant offices and other commercial real estate could also be converted into living space. Because offices are not as popular as in previous years. In 2020, 11 percent fewer office properties were sold than in the previous year. The total purchase price even fell by 15 percent to 20.8 billion euros. The numbers for retail properties also fell. For arable land, on the other hand, prices have risen further, from an average of EUR 2.10 per square meter in 2011 to EUR 3.30 last year.

“There are increasing signs that house prices in some cities and market segments can no longer be explained solely by the development of rents and low interest rates.”