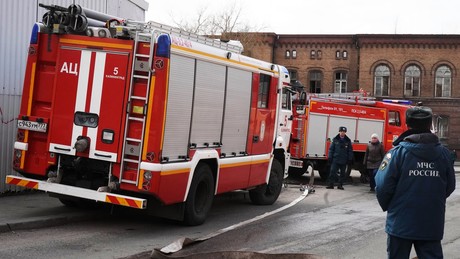 Two people died in a corona hospital in southern Russia. On Friday morning, a fire broke out in the intensive care unit for an initially unknown cause. Several employees and patients were evacuated.

On Friday morning, a fire broke out in Astrakhan, around 1,400 kilometers south of Moscow, in the intensive care unit of a corona hospital, reports the news agency RIA Nowosti. According to the investigation committee, two patients were killed in the fire. The exact causes are still being investigated. According to preliminary information, a ventilator caught fire. The news agency TASS reports, with reference to his own sources, of a short circuit in the lighting in the intensive care unit.

A total of 16 employees and patients were evacuated. The fire has already been extinguished, it said from the regional disaster control ministry.

The influx of patients in need of artificial respiration has placed an increased burden on medical facilities in Russia. This year alone there were several explosions and fires in Corona hospitals. In August, nine patients at an emergency hospital in Vladikavkaz died of a defect in an oxygen line. In August there was also a fire in Yaroslavl in which one person was killed. In November, an oxygen cylinder exploded in a Corona hospital in Murmansk, and nobody was injured.

more on the subject – North Macedonia: Fire in hospital for COVID-19 patients – At least 10 dead

Rashford reveals the position of his players on returning to training