NASA probe is the first spacecraft to touch the sun 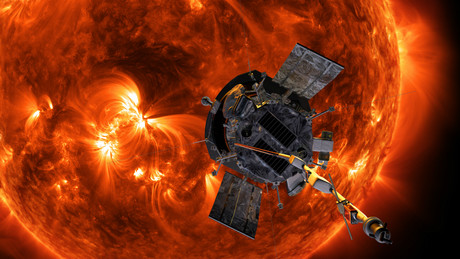 For the first time in the history of space travel, a probe has succeeded in touching the sun. As part of a fascinating NASA mission, the spaceship penetrated the so-called solar corona to gather important scientific knowledge about the star.

The NASA “Parker Solar Probe” probe flew through the outer atmosphere of the sun and, according to the US space agency, was the first spacecraft to touch this star. NASA announced on Tuesday that the probe had examined particles and magnetic fields in the so-called solar corona. The first flight through the solar corona took place in April and lasted only a few hours, and further flights are planned.

NASA manager Thomas Zurbuchen spoke of a “monumental moment” and a “remarkable achievement”:

“This milestone will not only give us deeper insights into how the sun is formed and how it affects the solar system, but everything we learn about our own star will teach us more about the stars in the rest of the universe.”

The “Parker Solar Probe” launched in August 2018 came closer to the sun just a few months later than any other spaceship before. At that time, the probe had moved closer than 42.7 million kilometers to the sun, breaking the record set up in April 1976 by the German-American “Helios 2” probe. Since then, the “Parker Solar Probe” has come closer to the sun and now circles around it in large elliptical orbits.

Protected by an almost twelve centimeter thick carbon armor, the approximately 7,000 kilogram probe, the size of a small car, is said to have to withstand more heat and radiation than any previous missile. NASA researchers hope that the mission, which is scheduled to run until 2025, will provide information about why the corona is many times hotter than the surface of the sun and thus also about how stars work. The data could also make future weather forecasts more accurate.

The next close flyby of the probe to the sun, which will probably lead again through the corona, is planned for January, it said by NASA. In the course of the mission, the probe should approach the surface of the sun up to about six million kilometers.

UAE suspends entry for arrivals from Congo, starting from Friday

In the event of a power shortage: Switzerland is planning a driving ban for e-cars

Loss of culture: the farewell of German handicraft businesses

UAE suspends entry for arrivals from Congo, starting from Friday